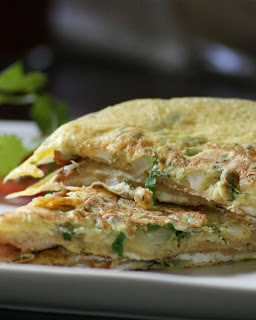 My entry for this event will be Bread Omelette! I will be posting the recipe this week.

1. Make an omelette this month. The recipe can be any variation of an omelette.
2. Take a picture of it.
3. Blog about it, and post the recipe and picture.
4. Make sure you add links to this post, and to Nandita's site.
5. Send it to me (kanchana AT marriedtoadesi DOT com) by November 1, 2007.

I encourage you all to be really creative, see the article below from Wikipedia for more ideas on omelettes.

"An omelette or omlet is a preparation of beaten egg cooked with butter or oil in a frying pan, usually folded around a filling such as cheese, vegetables, meat, or some combination of the above. Gourmet cook Julia Child famously described an omelette as soft-cooked scrambled eggs wrapped in an envelope of firmly-cooked scrambled eggs. Many variations exist.

oh . . wish I cud join! But then cant cook eggs this month - Thanks to my in-laws who have come visiting who hate eggs..and cos of which I cant make them during this time! anyways will join in next time :)

hey you can send this to Jugalbandi event too. nice pic!

You just eliminated all Vegans and real vegetarians out of this event girl!:D
I have done Frittata and Sundance Eggs, got to look for something unique. I will do it:)
RCI K part-1 is out, check out when you can.Have a great weekend K.

This is nice an d informative post. It was like i am reading a page from the Travel & living chanel.

Kanch... in my potato pancake recipe, I talked about our elaborate weekend breakfasts... I want to hug you right now... you picked a weekend favourite and I already have something in my drafts. Thanks sweetie.

Simple but overlooked. Omelette is a darn good choice. I don't have to scratch my head for this event :)

Omelette definately makes a great breakfast. Wonderful choice. All the best in hosting the event, Kanchana.

Thats lovely - and you've done tons of research on a world of omelettes...may be i'll come up with a vegetarian omelette -
:)

Sorry for being late in commenting here, am surviving on a make shift connection

I love your picture.. can't wait for you to give the recipe.. :)
Nice theme ... hopefully I can contribute something.

Great theme Kanchana! I am in :)

wow!, that is one international spread of the omlette barand!..will definitely try to aprticipate, but noe getting confised, which country, should i tie up with!!!

hmm....I dont actually cook eggs at home, dear!..will contribute next time..
you can send the pic over to the click event..its too good..!!simple and elegant..
..wanted to clarify this...is your camera user friendly(the rebel SLR)?do you have to fix and remove the lens every time??...I'm thinking of getting a new one in canon..

I'm new to WBB but definitely want to give this a shot. I just made my first omelette so I could test it out. heh. More playing and I might have something for this!

i really appreciate all the research you've done on the different kinds of omletes...

Thanks for bringing the black background back. The pictures really out much better.

K, will you accept vegan omlettes made the Indian way with chickpea flour? Long shot I know, but thought I'd ask! :)

Hi Kanchana,
I stumbled on ur blog site accidently and was surprised to find an old classmate of mine in one of your travel pictures.
Kanchana, I would be grateful to you, if you could check out with her, if she is an alumni of Indian School, Bahrain. she had left Bahrain many years back, when we were kids... so just want to make sure, if she is the same person. Please mail me back on das.d@arig.com.bh

Hi Kanchana!!
I was little late to see your posts and here you are hosting WBB#16. I would love to make an omelette for your event!! I am in!!!

That's such a great theme...the good old omelette is going to be celebrated at last:)

Kanchana - what a great blog site yu have! My children like you are growing up in North America - learning about their Iyer roots. A wonderful site for both recipes and culture. When are you going to post your reception photos?

ooh!! this is perfect:) 2 birds with one stone! Omelettes top my fv breakfast list!

btw, loved your idea about the blogs of Note section!:) nice one!!

I'm hosting AFAM-peach event this month, so find some time to send in your entry girl!

Thanks for this helpful and informative post. You know, I have been dreaming about the banana omelets I used to make in college--I have not had one for twenty years; maybe that is what I will try!

i totally understand the 'under construction' phase :)

i have been away from the scene for two weeks now, cuz of work. saw the announcement only now.. will definitely participate :)

sEi7tE Your blog is great. Articles is interesting!

Am new to blogging and just came across your WBB event. Have sent an entry. Hope it has reached you. Here is the link.
http://mydiversekitchen.blogspot.com/2007/10/stir-fried-vegetable-and-cheese.html

hi Kanchana, has sent in my entry..cud you plz confirm receipt..to make sure it has not gone to spam..
cheers,
sona

I have been a silent admirer of your blog and ofcourse your wedding pics :-)...

Wish I could participate in WBB, but I ran out of time..:-( Let me know if there is any hope of acceptance for a late entry! :-)