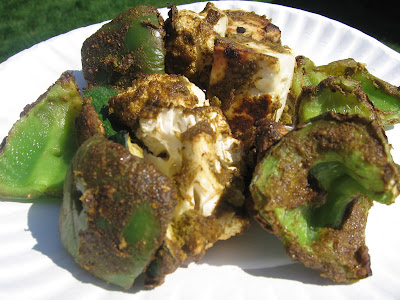 This weekend in Michigan we had the most gorgeous weather. For a change, it was HOT. And enjoy it we did, with a huge barbeque right in our townhouse complex. All of Shankar's friends in the Business School who hadn't left for the summer came out in full force. For the bbq, Shankar contributed his famous Paneer Kabobs. He made them before in the oven with the regular wooden sticks soaked in water. But then we found this incredible contraption at Target on clearance for 5 dollars. It is a square metal stand with grooves on the side to horizontally hold 5 metal skewers with a little ring at the end of each for turning. It sits right on top of your grill, or alternatively on a tray in your oven. This is a great idea as it prevents the marinade from sticking to your grill or tray.

We've done this at parties, and now a bbq and they are always a hit! You can soak the vegetables and paneer in the marinade overnight as well. The following recipe is for a large batch of kabobs. We made at least 25-30 kabobs with this. Keep the vegetables fairly large so they are easy to skewer and don't disintegrate into the grill. 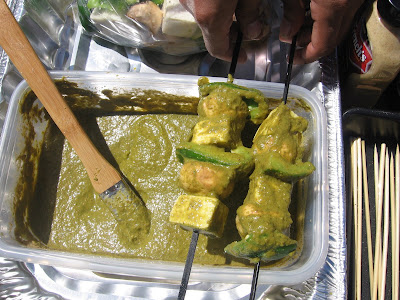 1. Grind all the ingredients together for the marinade. You can add a little water, but keep it quite thick.
2. Soak all the vegetables and paneer in the marinade overnight (optional).
3. Skewer the vegetetables, and brush more marinade on the vegetables.
4. The grill should be quite hot. Grill them on both sides till they char around the edges. Or broil in the oven until slightly blackened. 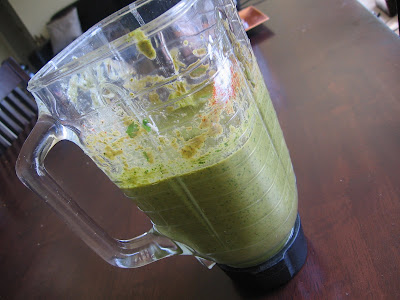 Serve plain or with chutney! 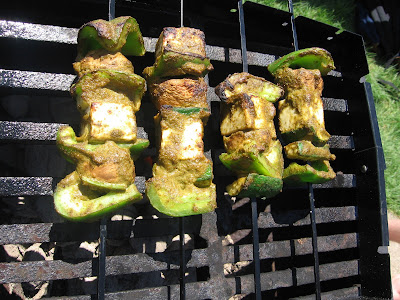 Verdict: This was a hit, we had people running up to grab the pieces off the plates. They ended up being 'share' plates!

That sounds like a must do recipe...no grills here but can either try it in the oven or my stive top non stick grill pan, once the weather eases or may be in the rains...this one goes into recipes to try folder..
Thanks dear!

Kanchana, Isn't it nice to have sun? This grilled Paneer looks yummo!!

wow kanchana good idea for barbeque parties right! Thanks for the wonderfull recipe!

Excellent, I have been making this since I was a little kid, I saw it on TV being made by Sanjeev Kapoor. Anyway your version made me remeber the days I would gather up all my friends at my house in India and we would cook it with coal. It was always a hit.
For a change you can also try to marinate in the ready made Tandoori paste, or you can make one at home as well. Its a treat as well. I am going to try follow your version this weekend. Thanks

This I gotta make when the weather gets warmer....I do love Cilantro! good one, you two.

hey just googled paneer marinade and came across your website. I tried it and it is GOOD. For a change the vegetarians in my group got to have something fun too. Thanks for posting it.

hi, I was searching grilling paneer on internet and got this link. Looks good. But my panner stick to the griller, even though I oil it before. Can you tell me why.

Not sure why, but my paneer melted on the grill and fell off the skewers into the grill. This was after being on the grill for approx 5 minutes. They didn't even get a chance to char. Any ideas whey this would happen? The paneer was very firm to start with.

Vg - try a lower flame for a longer time. Or put them on a greased aluminum tray on the grill. That has helped us - I know the situation you are talking about. We had better results with a charcoal grill vs gas BBQ

We r plang for a barbecue tmrw..u r recipe looks awsum...glad to find u ..ur happy follower now..