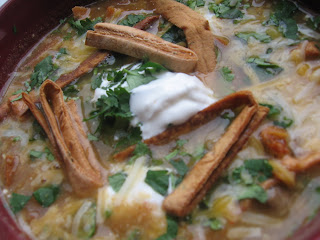 Howdy folks! Just to spice things up a little bit, I thought I would post instead of Kanchana today. Lest you think that Kanchana's husband can actually cook well, here is a sample of one of my most spectacular failures. I told Kanchana that I would make soup today and I did... It was unpalatable and the most generous term that can be used to describe it is "disgusting".

We managed to it look good for the pictures but all the good looks in the world could not make it taste good. To serve as a good warning, I'll post the recipe and pictures as well as the changes that will make it taste better.

Saute jalapenos, green onions and mushrooms in oil. Add refried beans and stock. Leave on low heat. Meanwhile, mash up some avocado with lemon, salt and pepper. Cut tortillas into strips, drizzle with oil and bake at 350 until crispy. Boil the potato and turn it into a starchy glop with some of the stock. Add stock, mashed avocado, diced tomato and starchy glop. Salt to lack of taste. Add large amounts of Mexican spices in order to mask the unnatural flavors.

Pour the resulting thing into a bowl and garnish soup with the crispy tortilla strips, cheese, sour cream and cilantro. Have a very small taste and then throw the concoction out. DO NOT FEED TO THE DOG - Serious harm can result. 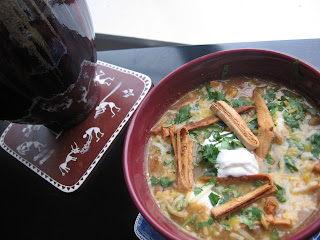 Changes to make the dang thing acceptable:
1. NO REFRIED BEANS - Don't be lazy. Soak some black beans, cook them and use in lieu of aforementioned crap.
2. NO POTATO - Find some other way of thickening the soup instead of resorting to this cheap starch source that contributes nothing of value.
3. Grill the mushrooms with long strips of bell peppers and red onions with some fajita-style spices.
4. Don't mash up the avocado - cut it into little chunks and add it towards the end. Don't cook it in the stock with all the other stuff.
5. Avoid the whole thing and go to Taco Bell - they serve better stuff than this wretched dish. 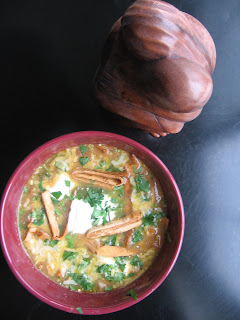 haha...that was a really brave and honest post from you Shankar. To come out and tell what a mess you made is quite tough, I know I wouldn't do that unless I am sure I can salvage a few praises there too :P
And thank you for the tips in the end. I'll make sure I avoid making mistakes :-)