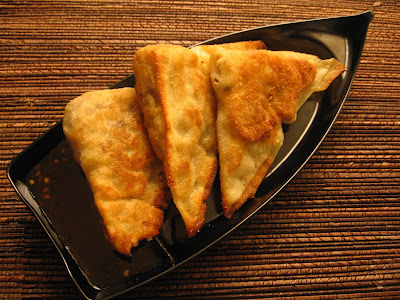 I was recently watching some show on FoodTV where all the food is 'semi-homemade' (At least she admits it, I have to give her that!). It seems to be the new trend of that channel. I actually really enjoyed watching chefs who prepared food with skill, and who used cooking techniques. Regardless of whether I prepare their dishes or not, I certainly do incorporate a lot of the techniques I learned watching them. I'm so sick of watching people with shows, making cakes and cookies out of box mixes and claiming it as their own 'recipes'. Anyways, my experiment with semi-homemade samosas made me think of these shows.

We had leftover egg noodle wraps from the spring rolls at our dinner party, and they had to be used within a week according to the package. So a few days later I decided to make Samosas, it also happened to be Holi that day. Shankar came home from school and told me about the Indian snacks that were organized by the Indian Business Students association which gave me a hankering for these goodies.

They were super easy to make, and I can claim some 'homemade' on part of it. This recipe makes 6 samosas.

1. Grind the chilis, coriander seeds, and anardhana in a mortar and pestle. It doesn't have to be super fine and can be a little coarse.
2. Fry the cumin seeds in oil until it froths, add the ground ingredients.
3. Add the peas (I usually keep frozen peas on hand).
4. Add salt, potatoes and mix thoroughly. Let the potatoes roast a little bit and then take them off the heat.
5. Place an egg roll wrapper on your board, and brush water on all four edges. Place a tbsp of the potato mixture in one corner and then fold the other corner over and seal. You will make a triangular shape like this.
6. Shallow fry it on both sides in some oil. You don't need to deep fry them. Just enough oil to coat the bottom of the pan is fine. 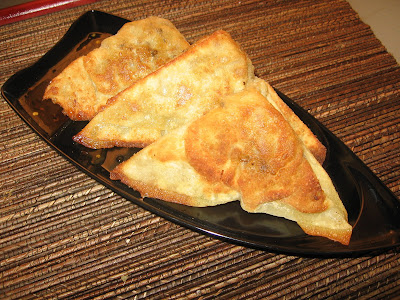 The great thing about this recipe was that I made one or two samosas to try it out, and then put away the filling. Later that evening we had some friends drop by, and it only took me a few minutes to fry up a batch of samosas. You can try so many different kinds of fillings, this seems to be a typical filling for Punjabi samosas. I also like kasoori methi (dried fenugreek leaves) , or cilantro for additional flavor. Serve them with tamarind sauce, and additionally the coriander/mint chutney. You can make these at home, but honestly I buy them in jars from the Indian store and keep them on hand. I usually find that I need to dilute them with a bit of water. Frozen samosas fried up are a favourite at parties we have with our Business School friends, but I find these use less oil, but still taste good!

Verdict: Shankar was not so impressed with the crust, claiming it was nowhere near the authentic crust. It isn't I agree, but I liked the variation. His friends who came over DEVOURED the samosas. I mean they were really a hit, and one friend didn't even get any because he wasn't fast enough. So, if you like the sound of this try it out and let me know how your family enjoys them!

Looks great to me!You can also use Phyllo dough and Wonton wraps too.Phyllo are great to roll like triangular Samosas.Thin Tortillas are great too.
Thanks for the recipe,sounds great.

lovely idea...especially when craving something really quick. I'll have to try these, but do the noodle wraps have that *eggy* smell?? that's what would put me off...

Hey Asha, so you've seen the show too! Honestly I cannot maintain a manicure and cook the way I do. It's not possible.

Trupti, I promise there was no eggy smell at all. If you didn't know that they were called egg noodles, you wouldn't even think there were eggs in it.

sandra lee is a horror on steroids. sorry, i can't stand her. kanchana, your dish looks to much better than what she'll ever make.

can you bake them instead of frying them?

Sure they were a hit. Did anybody get injured when you threw them..for sure they dont look edible.