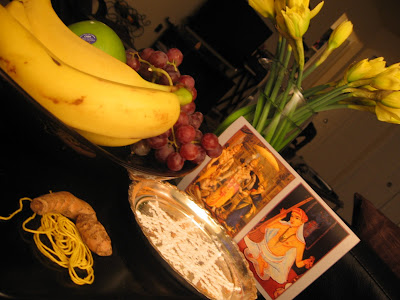 Karadaiyan Nombu is a festival celebrated by South Indian married women in Tamil Nadu. North Indian women have a similar festival called Karva Chauth. The premise is that married women pray to never be separated from their husbands. The story of Savithri's devotion to her husband Sathyavan is remembered that day, you can read about it here. I have a younger sister named Savithri, so we were quite familiar with it growing up, and we loved reading the romantic story in the Amar Chitra Katha comic books.

For Karadaiyan Nombu, I called up my dear M-in-law to find out what exactly I was supposed to do. I took down notes and emailed them to her to double check. I never claimed to be a big Thamizh Pullavar, I can barely speak the language but what ensued had my M-in-law in stitches.

Nombu Notes:
1. Wash your hair, and wear a madisaar (nine yards saree).
2. Do not eat leftovers.
3. Make both sweet and savory Adai/Kozhakattai.
4. Make a kolam in front of swami.
5. Place the manja charadu (yellow string), fruits, and butter in front of swami.
6. Tie the first charadu on Devi, with flowers or fresh manjal.
7. Tie the second one on yourself, and repeat:
"Urukaatha venaiyum, Oradaiyum, naan noothEn, Orukaalum yen kanavan thiriyavendam".
8. Serve the Kozhakattai as neiveythiyam to god.
9. Do a namaskaram for Shankar, and give the neiveythiyam to shankar.

Luckily for me my mother was visiting from Toronto, so the two of us had the laptop open and diligently followed the instructions. Also my organized mother made sure to bring soaked black eyed peas with her, and also manjal. The adai turned out nicely thanks to my mom, and we did our puja together. Luckily for me my hubby is such a sweet fellow, and he made us a delicious lemon rasam for dinner which we served up with beans curry, and a green pepper mushroom curry that my dad made! So the women were praying, and the men did the cooking! A nice modern twist on Karadaiyan Nombu. If one had to compare Shankar and I cooking nice dishes for our respective in-laws I do think my folks got the better end of the deal! Below are the recipes straight from Chennai courtesy of my mamiyar.

1. Dry roast the flour till it is slightly off white in colour (when you try putting kolam with it the flour should be flow easily ....in the sense that the line should continuous!)
2. Boil 2 cups of water with the jaggery, black eyed beans & coconut bits, & cardamom powder. Once the jaggery has melted completely add the flour. Reduce the heat & mix & cook till the water is gone.
3. Let it cool for some time so that you can roll it without getting blisters. Roll them into balls, flatten them and make a hole in the middle.
4. Steam them in an idly steamer for 10 minutes or so. 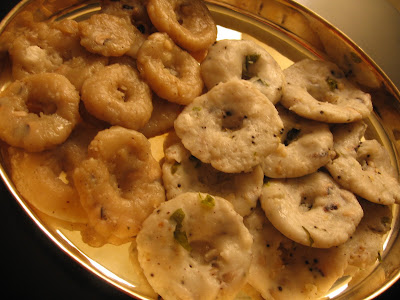 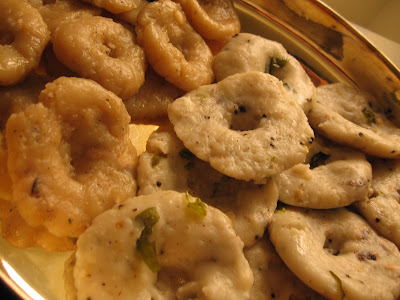 Verdict: I don't think the men were really all that into the Adai's that we made for them but Mom and I certainly enjoyed them! Shankar's rasam was the hit of the night, and his secret ingredient was to add a stalk of lemongrass that was left in our fridge from the Thai cooking. 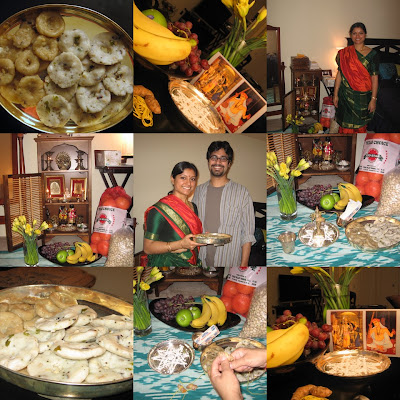 Hey Kanchana! I certify that your vella adai and uppadais were good because I have tasted them! You should thank your mother in law for the best recepie.

Hi Kanchana,look at you!You are doing all that what our grandmothers used to do!:)) Good job,dishes look great and approval fro your dad too.Enjoy sweetie.
I am married for 20 yrs,never did all these even once!;D

Dear Kanchana,
Thank Gomathy for a flawless step by step instruction in making fabulous tasting adaigal. With a daughter named Savithri it is extra special to observe this nombu. Another chance to get decked out in the nine yards!

Your photos are divine. You brought the festival from home. Very nice. Viji

Lovely...! You look beautiful in that traditional sari. Nice info. on this tradition.

Hi Kanchana, first time in your blog. You look good in the madisar sari. I saw similar article about this nombu in Ammupatti's blog I suppose. The Adai and Uppadis look so yummy.

oh forgot to ask is it Kozhukattai with hole?

Hi Kanchana, that's a very nice write-up. Being a madrasi myself, I haven't managed one decent karadaiyan nombu in the 7 years of my married life:( but these pictures do inspire me that it's worth giving it a try again:)
please can you post one on tamil new year too (i mean pre-festival). and a compliment from my 2 year old... he had one look at your photo in madisar and claims you're his maami;)

hi am from bangalore. tam -brahm and was browsing food blogs! u look lovely in madisar.romba azaga irukkel! -love vani

Yes Kanchana. Though I am a Mallu, I am married to a Punjabi guy & keep the karva-chauth vrath. Getting all decked up fills in for staying hungry & thirsty all day. And the end is always good. N that's truly a day you get to boss around your husbands (not that you need a reason to)

You have tied the madi-saar so nicely. My MIL just got me a ready to wear version stitched. Going to try it out this year:)

Kanchana, Lovely post. I am linking this to mine.

Hi Kanchana,
My name is Birundha from Kumbakonam, India. I live in colorado springs from past 4 years, before that I lived in West Bloomfied, MI for 5 years. I had a chance to visit your blog today as I was looking for some recipes. Your madisar in nombu was too good. As you were broughtup in CA, I wonder how did you learn to wear madisar. I still struggle in some steps, had to call each time either my MIL or mom back in India.
Very nice color saree and you look pretty in that. So are you working in MI? Your blog looks very good.

If you ever wants to contact me my email is ambr50@yahoo.com.

Your wedding photos are also good. Hope you might have finshed your 2 year of wedding life. Congrats!!1

You are a very pretty lady! You have excellent recipes on your blog. Thanks for all the recipes.

Hi Kanchana,
Very impressed with your blog! Kudos! I live in the East Coast and been trying to find/build a suitable Pooja almirah... Did you bring yours from India or you guys put it together using materials from Home Depot? Pls let me know...
Thanks
Ramya

I got the cupboard from Target a few years ago. They were selling in the bath accessories dept, I guess its intended to house towels etc!

Thanks for the well wishes!

What a lovely post. I found yoru blog a few days ago (while searching for pongal recipes) and have been hooked to it very since. You have a lovely family :) God bless!

HI the post is good, do you mind telling me how did you manage to tie a madisar saree. can you show me or describe the steps..

Thanks in advance.
Shona

Latha and her mother were making the adais here this evening (14 March 2011) and I googled karadai nombu for fun. Of course,your site popped up on the top. Nice pic. Item seven of your list brought the house down! What're you doing this time? love, krishnan mama

Latha and her mother were making the adais here this evening (14 March 2011) and I googled karadai nombu for fun. Of course,your site popped up on the top. Nice pic. Item seven of your list brought the house down! What're you doing this time? love, krishnan mama

This is Srividya Aunty from Oakville. To my surprise when I was just googling I found your blog.Fantastic!

dear kanchanaa,
very interesting description.i learnt a lot from it.can u tell me what is karadaiyan?on 14 march i will prepare the adais as u have taught.thanks a lot.
really as others also said ,u look good in madisar.i will also wear the same .love .---devika[chennai]

Lovely Madisar and adai :) was ROFL reading ur mistake on the sloka :) have a great nonbu this year too!!

Nice blog. But that is one thing that in incorrect in your recipe. Karaadai - as the name says is made with karamani payaru and not black eye peas. Karamani must be soaked over night and then used while making the adai.

Thanks a lot for the recipe. Very helpful website!