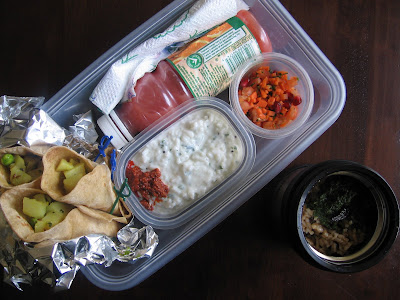 UPDATE: This is my entry for The Daily Tiffin's Show me your Lunchbox

The other night I got a phone call from my in-laws about my F-in-law's trip to the US from Madras this weekend. He planned to stop in Detroit en route to California to drop off some stuff with us. I did get the instructions from my M-in-law to take some food for him as he would be just getting off an 18 hr flight, and having to go on another 5 hr journey, needless to say even if she hadn't said this I would have done it. But the funny part is our dear VKV Mama, who is staying with my in-laws in India requested me to make sure I put whatever I made for Appa on the blog so they could see too. Well, this posed quite a challenge for me, and I hope I have risen up to it!

In making my own version of the classic Indian tiffan dabba I decided to take a queue from Jen's beautiful Vegan Lunchboxes, and try a bento box style. Being Indian, I have a tonne of tupperware lying around so I used a nice flat rectangular box as the base and filled it up with a few smaller boxes, and juice containers. My m-in-law had recommended I make rotis, but I decided that something hot in a thermos might be good after such a long trip. The bento boxes really remind me of how they serve the food to you on the airplanes, so I guess the theme was quite apropos. I wasn't sure what Appa would feel like eating so I decided to make a little bit of a few different items and then he could choose from them.

1. Roast all the ingredients except the last, and then grind them.

1. Splutter the mustard seeds in sesame oil, add the toor daal, urad daal, fenugreek seeds, asafetida and curry leaves. Roast till they are golden brown.
2. Add the wonderberries, vatral kuzhambu powder, and red chili powder, and mix.
3. Add the tamarind juice, and water.
4. Boil this until it becomes a nice concentrated liquid, and add salt.

Now, I have been told that the vatral kuzhambu podi should be matched with an equal quantity of red chili powder. That was too hot for me, you can adjust to your taste. I like mine to have quite a bit of the vatral kuzhambu podi taste as well. Taste it, smell it, the more you make it the better you will get. This is really just a guideline. I guess it's supposed to be quite hot as people usually mix the sadham with a lot of ghee, but I'm not a fan of using a lot of ghee.

* As I learned from my culinary training at the Sundaram School of Cooking, the classic combo for vatral kuzhambu is more keerai, which is just your standard keerai recipe (spinach with mustard seeds, channa daal, dried red chillies), with the addition of moremilagai! Chillis that have been soaked in buttermilk and salt and dried in the sun, and then deep fried till they are black. Yum, seriously. The recipes are from my dear M-in-law, and we dried the moremilagai's together when she was visiting me this past summer. A friend of ours had wonderberries growing in their garden so we picked them also and dried them in the sun after soaking them in buttermilk and salt, it was very cool.

1. Roast the cumin seeds in oil, and add the turmeric, and green chillies.
2. Add the peas and cook for a few min.
3. Add the potatoes, salt, and methi and mix well.

The Verdict: Appa ate the vetral kuzhmabu first. By the time we sat down it wasn't as hot as I had hoped, but he said it was still warm. At first he started out saying he wasn't sure he could eat all of it, and then after eating and saying it was 'so good' he finished all of it. (score!) Appa ate some of the yogurt rice, drank the orange cranberry juice and then he got full. He didn't want roti's because he had already eaten the ones Amma packed for him from India. Shankar then finished the remaining yogurt rice and 2 roti's, and I ate the last roti. The salad came back home.

Kanchana you have passed the test of a good bahu ..daughter in law with flying colours :)
Each item is packed so neatly and lovingly. I am impressed and I am sure your in laws are impressed too :)

Hi Kanchana! first time to your blog via Trupti's. I'm mesmerised with the pictures, recipes and the beautiful presentation.... (may I also add that you're so lovely)

Is the lunch dabba offer extended to other too...like say, meeee ?? ;-)

That was wonderful writeup,everything was very live...

So, impressed your FIL with delicious tradional dishes.Good job.Presentation is too good.

You're quite the DIL....I am sure your FIL appreciated it very much.

Archana: I guess I passed the test when our parents arranged our marriage..haha. But always good to score more points:)
Asha: Can't finish the meal with out the mosaranna!
Latha: Thanks a lot! I do hope you come back! Priya: For you, anytime my dear.
Usha: My FIL is hard to impress! But looks like the news got back to India regarding vetha kuzhambu, so looks like it was ok!
Chickoo: I had to use the tupperware somehow!
Trupti: He did appreciate it:) He does a lot of stuff for Shankar and myself so it was worth taking the effort for him!

Thanks for passing by my blog and the lovely comment...yes amazing the bond between father and daughter...equally between son and mother I think...I am new to your blog...i must read your posts...seems you have a great blog here....thanks again...

Great pics,content and style of writing. On the whole, a very nicely put together impressive blog!
Keep up the good work:-)

impressive lunch box kanchana. mosaranna with pickle is something which i love to have after long flight.

What a sweet daughter-in-law you are...your Appa must have been bowled over
The lunch box looks heavenly and so neatly & thoughtfully packed up

Loved your tiffin dabba. Your in-laws must be proud! not to mention ur hubby. Lovely recipe too!

That was so very thoughtful...must have bowled your FIL over!!!

Dear Ms.Kanchana,
I loved your blog site..its so informative and interesting for a beginner like me..thanks a bunch for providing such delicious and mouth watering recipies..i guess urs will be one of my favorite blog sites for my everyday cooking

Thanks for a wonderful vatral kozumbu recipe! I just blogged about my first attempt to make it :)

Colorful and healthy. You are so creative. Thank you for the entry to the DT!

Hi Kanchana,
Just discovered your blog yesterday and have been very impressed with your recipes, your stylke of writing and your husband that cooks :)
All kidding aside - would you mind posting a detailed recipe for more keerai? I know you have a brief one, but I wanted to find out what the texture of the keerai is - is it kootu-like or masiyal like or like a dry bhaaji?

Thanks much for all the great posts - they keep me inspired to tackle the task of dinner after a long commute :)

Your vatral kozhambu was a super hit! awesome proportions I must say! Thanks for sharing...

You are one for the few to actually adding Vatral to the Kuzhambu. Many make pulli Kuzhambu and call it Vatral Kuzhambu.