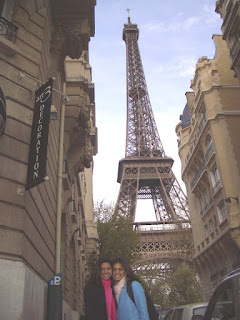 Paris
Maybe I'm partial to the French because I'm Canadian, but it really is a beautiful place full of so much history. I find the language so beautiful to listen to. My friends Geetanjali, Monica and I made a trip to the Fashion Capitals of the World; NY, London, Paris, and Milan. Geeta and I made the trip to Paris ourselves from London via the Eurostar. We reached Paris and immediately began mastering the Metro. Our hotel was in an area habited by musicians with music and instrument shops lining the street. Our concierge was Algerian, and got a great kick out of the two Indian girls who stayed at his hotel.

Day 1: We went to the Museum of Modern art, and were disappointed to find out that it was closed. But we got some cool pictures of kids skateboarding in front of it. We headed to the Eiffel tower and enjoyed a nice lunch there. Next stop was the Louvre where we fell in love with the paintings of the renaissance and of the 17th & 18th century. We ended up getting the audio tour, where you walk around the museum with a pair of headphones provided by the Museum. The museum is huge, packed with people, and very well maintained. We decided to go to the Latin Quarter after hearing that there was a great nightlife scene there with a lot of ethnic communities, as we talked about it on the Metro ride over we ran into two American girls who were living in France studying French. They decided to make a stop with us and take us to a very unusual Jazz bar. The first thing you notice entering the establishment is that the floor is planted with grass. We then headed into the area with the band, which led us down stone steps at the back of the bar into an actual dungeon complete with rusted chains and handcuffs. It was filled with tables and chairs, and the room quickly became packed. I think it was some of the best music Geeta and I have ever heard! We topped off the night at a great Indian restaurant because everything else was closed.

Day 2: We woke up early and had breakfast at a nearby cafe. Les ouefs of course, in the form of an omlette. Then we headed onto the Metro and navigated our way by train to Versailles. This palace is so steeped in France's history. It's so fascinating to see the bed that King Louis slept in and the gardens are spectacular. There were a lot of Japanese tourists there. After we came back from Versaille, we headed over to Notre Dame and payed homage to the awesome gargoyled cathedral, and finally we took the metro to MonteMarte. This was shocking experience for Geeta and I when her wallet was stolen. There is even a picture where you can see her backpack open. It was such a violation. We spent the rest of the night cancelling her credit cards, but poor thing had just gotten her first gucci wallet. Luckily my friend is such a good sport, and didn't let it ruin her trip. In fact she vowed to own a better wallet, and I think she has succeeded many times over now! The night was not completely wasted as we settled to a little pub at the top of the mountain and sampled some lovely wine and cheeses.

Day 3: We got up, packed up, checked out and headed out to the Champs Elysee to have breakfast and do some shopping. Girls, shopping, and keeping track of the time are a few things that don't work together. A few hours later after eating yummy panini's and yogurt Geeta and I are lost in NafNaf trying on clothes. When we finally woke up to the time, it was a race back to the hotel on the Metro, we grabbed our bags headed back on the Metro to go to the bus station where we casually figured there would be a bus to the airport. Not de Gaulle, some other Buffalo type airport in the middle of nowhere. Of course there is no bus, and we end up negotiating with a cabbie to drive us out to the middle of nowhere, for 100 euros. And we end up in a traffic jam, by some miracle the ticketing window is almost closed for our flight, we manage to check a huge bag each, and board the plane. It was a harrowing experience. And it cost us! A 20 euro flight to milan, ended up costing us an extra 50 euros each.

France is such a beautiful country, and Paris is so architecturally beautiful. We were so enamored with art that we ended up taking pictures of the advertising in the metro because we were so fascinated. Granted as soon as we get off the train in Paris, the first ad we see is for a Bharatha Natyam performance in Paris by Mallavika Sarukai. How apt. I don't think Geeta and I will ever forget that trip. 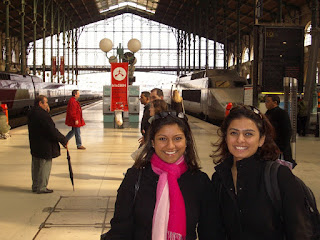