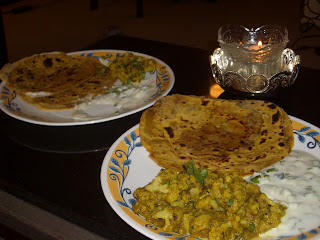 This is probably one of Shankar and my favourite foods to eat. My husband loves paratha's - any kind. And I love roti's and subji's. A subji is pretty much a vegetable curry. It takes about 45 min - 1 hour to do the whole thing. I think it took me about 45 minutes last night. The more you do it, the faster you will get. It's really all about practicing multi-tasking and interleaving the two recipes together, so as you are doing one thing another thing starts happening. I swear, South Indian mothers work like supercomputers they way they multi-task. And the memory's they have! My mother never forgets anything, unless she considers it a useless piece of information. The caulifower subji is my m-in-law's recipe, and paratha's are something both my mom and my m-in-law are experts at! I'll give you both recipes, and then I'll explain how you can do two things at once! Or maybe even three!!! This is to serve two people, just double everything for more people.
Cauliflower Curry

. Grind handfuls of mint and coriander with 1 chopped onion, 1 - 1.5 large green chili, 2 tbsp of grated ginger (or chopped - or just large dice up the ginger and throw it in), 1 large tomato, and some water. So the picture has all of these, but I forgot the onion in the picture! 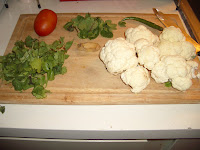 . Break up about 1/2 a large head of cauliflower into florets. You can also use frozen cauliflower, which is already broken up. Microwave this for about 5-7 minutes. My microwave is a little older and takes 7 minutes, but mom's at home takes only 4-5 minutes. Just take it out and see if its cooked, if not stick it back in for a few more minutes.
. While the cauliflower is micro-ing, heat some olive oil in a pan. Veg oil or corn oil is ok too, but we use olive as it has less saturated fat. Cook about a tbsp of cumin seeds in this. You can add more if you want, that is just an approximation.
. Add the gravy and cook that. Add 2 tsp of anardhana powder - pomegranate powder, and 2 tsp of amchur powder - mango powder. Add salt.
. Add the cauliflower and mix it all up. You can thicken this sauce if it is too watery with some kadalai maavu - besan flour, or chickpea flour. Garnish with coriander, chopped.

Aloo Parata
My husband had made this aloo in gravy as a side dish the other night, and I kept the leftovers in the fridge. We used the later to make aloo-cheese sandwiches toasted on a griddle with store bought buns, and also today to make the parata's. Leftover aloo subji is a useful thing!

. Boil 2 large potatoes. I peel them and chop into pieces, then cook in a microwave steamer for 10 minutes. Microwave steamers or rice cookers are awesome. And they are like 6 bucks at Walmart. Get one.
. Now the gravy that you add to these potatoes is the same as the Cauliflower Subzi. So just make extra of that and reserve some to add to your potatoes. What I would do is before you add the cauliflower to the gravy, take the extra out to add to your potatoes. You can also add dhania jeera powder to the gravy if you want additional flavouring. Don't forget to salt your potatoes. They need a lot of salt.
. The parata dough is just atta - whole wheat flour mixed with water and salt. You can flavor with all kinds of spices, or keep it plain. I sometimes add omam - ajwain, or cumin, turmeric, or chili powder. Mix the dough, till it is soft and won't stick to the counter. Add some oil at the end. Again, I use olive. Shankar's aunt, Akhila Chithi, recommended the flour brand 'Sujatha'. It is a fantastic flour, and I suggest using that. The dough will be nice and soft and pliable with that. Don't over work it. Start adding water slowly and mixing it up.
. I use the two-chappathi method for parata's, that is roll out the dough into two circles. Place the aloo filling on top of one, and spread it out. Cover with the other chappathi, and seal the edges with your fingers. And roll this out again. 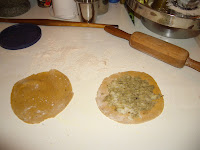 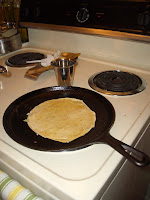 . Place on a heated cast iron, or steel pan, and cook on medium heat till both sides have browned and the dough has cooked through. Add oil to the parata at this point before you flip it.

This is the simplest raita known to man. Dice some cucumber finely. About a 4 inch chunk of cucumber. Add yogurt to this, and a bit of buttermilk or water to thin it out. Add salt, 1 tsp dhania jeera powder, and 1/4 tsp of garam masala, and fresh ground black pepper. Mix and garnish with chopped coriander.

How to multi-task
I recommend mixing the dough in advance. This gets one step out of the way. I had made daal dhokri two nights ago, and had some leftover dough from that. I kept it in the fridge and used it to make the paratha's tonight. First thing you do is cook the alu. Put them in the microwave, then you can start taking out all the ingredients for the cauliflower. Break up the cauliflower into florets. Grind up the paste. When the potato is done, pull it out and throw in the cauliflower. Start your hot pan and the cumin, and cook the gravy. Mash the potatoes, and add some of the cooked gravy to that. Toss the cooked cauliflower into the pan with the rest of the gravy. If the cauliflower is fully cooked in the microwave you are done. If it needs to cook some more. Then just keep on a low heat with the pan covered, and it'll steam inside. You need to heat it up or medium high stirring to prevent burning, and then reduce to low heat before you cover it to steam it. Let your cauliflower steam or if its done turn off the heat. Heat up your roti tawa (griddle) on medium-high.

Start rolling out your dough. Flour your workspace with atta, flatten the atta into little balls and then roll out the two chappathi's. Once you have one parata on the griddle, start rolling out the next one, keeping an eye on the griddle so you can flip the parata. Work this in tandem. If it's too hard get someone to flip the parata's for you, and oil them before flipping. Practice. That's the only way to get the hang of this. But once you master it, its a great feeling. Suddenly you will find yourself making parata's and chappathi's all the time. 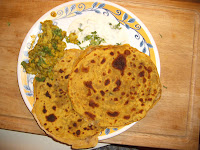 Do we really need 2 tsp of Amchur?
I added that much and the dish became extremely sour, had to scramble to make it less sour but it still felt a little too tangy.

Rekha - 2 tsp is a typo - way too much. A large pinch should do the trick! I would say a 1/4 tsp is good or less. You can add and taste and add more if necessary! Sorry about that!!!

i tried your recipe and it was great !